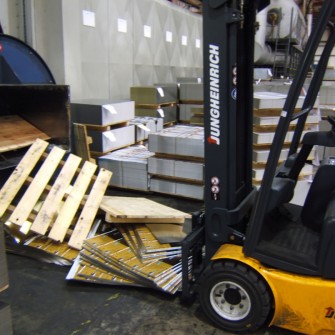 A former factory worker may need to have his foot and lower leg amputated after a crush injury caused by safety failings by his employers.

David Wain, 51, of Holme Wood, Bradford, suffered serious injuries when a 1.5 tonne pallet of tin plates fell onto his right lower leg and foot when he was employed by Emballator UK Ltd at their factory in Tyersal.

The incident, in February last year, was investigated by the Health and Safety Executive (HSE), which prosecuted the company after identifying a number of safety failings.

Bradford Magistrates’ Court was told Mr Wain, a coating assistant at the plant, which manufactures tin cans, had been told to use an older machine to turn the bulk tin plate as a fault had developed on the usual, more modern, pallet turner.

Mr Wain used a forklift truck to pick up a pallet of plates, loaded the machine the way he had been told – wedging the load using empty pallets – and switched it on.

Moments later, he saw the plates and pallets moving. He tried to get out of the way but the full load of metal plates spilled out of the machine, trapping his foot against the floor.

Part of Mr Wain’s big toe was severed and the sole of his foot was split. Surgeons managed to reattach the next two toes and he needed plates put into his ankle and screws into his lower leg. He was in hospital for 11 days.

Mr Wain has been housebound since the incident and unable to walk without crutches. He was informed earlier this year that his foot and lower leg may need to be amputated.

HSE found Emballator UK Ltd had failed to provide both safe equipment and a safe system of work. The firm had not identified the risks involved with using the older machine, and in particular the risk of the plates falling out.

After the hearing, HSE Inspector Andrea Jones said: “Everyone has the right to come home from work safe and well. But David Wain suffered life-changing injuries in an incident that was preventable.

“Emballator UK Ltd failed in their duties to provide a suitable machine for turning pallets and a safe method of operation that Mr Wain could use.”

Image shows shows the incident scene; the metal plates and pallets having fallen in a waterfall effect from the plate turner